Occasionally in a spiritual biography, you will read of a person meeting a spiritual teacher in a dream or altered state before meeting him or her in waking reality. Oddly, this has occurred to me twice. The second time astounded me, as I felt stunned to meet the head of HanMi Buddhism (the Chinese Esoteric School of Buddhism), Dechan Jueren or Master Yu Tian Jian; a figure that I had conversed with in dreams and lucid dreams for more than fifteen years. During this time, I had little interest in Buddhism, and no waking knowledge of Chinese Buddhism. 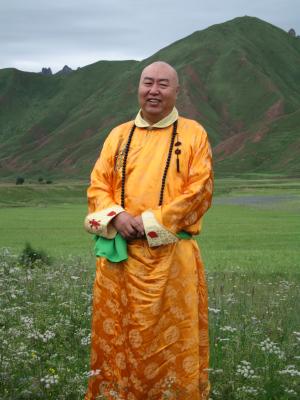 My first spiritual teachers appeared to me in a precognitive dream on June 16, 1973. I call the dream “precognitive,” because a “Voice” behind me explained that the events portrayed would occur in three years time. I patiently waited and three years later to that day, the main dream events had occurred.

A portion of the dream included an introduction to my first spiritual teachers, Jane Roberts and Rob Butts, who published the mind-expanding work, known as The Seth Material. In the dream, brilliant light shot out from their faces and the lamp between them, as they sat in a bar. Upon waking, my Midwestern conventionality felt very concerned that bar patrons could assume the role of my spiritual teachers! Obviously, I had a lot to learn and many stereotypes to overcome.

The profound ideas in the Seth material helped me immensely as a lucid dreamer (someone who achieves conscious awareness while in the dream state) since the mid 1970’s. Lucid, I could examine the mind’s creation of experience, explore the larger self, and after twenty years of lucid dreaming, seek to go “beyond” form, or beyond lucid dreaming. Prior to and during this intense period, I noted the re-appearance of an Asian teacher, who often congratulated me on my dream abilities and gave me advice. I mention this unknown figure in my book, Lucid Dreaming: Gateway to the Inner Self (Moment Point Press, 2009). At the time, I assumed that this Asian teacher represented a symbolic archetype or perhaps a past life helper (see pg 132 in my book).

After completing the book’s final editing and proof-reading in the spring of 2008, I had a series of “gifting” dreams. Known and unknown people appeared in my dreams bearing gifts – sometimes thousands of gifts! I considered this an auspicious sign. The gift dreams culminated in an extremely real seeming dream in which a bald headed Chinese Buddhist sat in a temple room, and presented me with an ancient turquoise necklace. As he put it around my neck, the room exploded into intense violet blocks of light! I woke, feeling both mystified and transformed.

Little did I realize that this Chinese Buddhist gift dream would become the inner key to unlock a whole series of unusual dreams and waking events (because of their length and detail, I will not mention them here). Coincidentally, it occurred a month before the passing of one of my first spiritual teachers, Robert Butts in May 2008, whose wife, Jane Roberts, had pre-deceased him.

Afterwards, I wrote a friend about this powerful dream of the Chinese Buddhist giving me an ancient turquoise necklace. My friend responded that he planned to host a Chinese Buddhist master’s workshop in the San Francisco Bay area in a few months, and included the link. I clicked the link. Suddenly, I saw the man who had given me the ancient turquoise necklace!

Words can hardly explain the powerful sense of recognition, amazement, wonder and shock that possessed me at that moment. The dream helper and advisor, who had appeared in my dreams and lucid dreams intermittently for more than fifteen years existed in waking reality!

As I reviewed his life, I realized that for almost two decades, I had dreamt of him, Master Yu, as he appeared at the time of the dream. Since becoming the head of HanMi Buddhism in 1989, his appearance has changed considerably (a point that he acknowledges in his talks). Now, other unusual dreams suddenly made sense – hearing Buddhist phrases, seeing little known Buddhist icons, sitting in Buddhist temples, traveling around China and Mongolia, etc.

Master Yu Tian Jian, or Dechan Jueren, has been named the 49th lineage holder of the Chinese Esoteric school of Buddhism, or HanMi Buddhism. Additionally, he serves as the 47th lineage holder of the Linji branch of the Chan tradition (or Chinese Zen tradition). I feel honored to meet the head of this ancient lineage in the waking world and learn of his spiritual attainment and wisdom. Master Yu passed from the physical world on Dec. 23, 2011 at 9:09 a.m. in Chaoyang City, China.

Please read more about Master Yu’s amazing story and the history of this lineage.